Have fun learning the violin!

“I began playing violin in elementary school when I was seven
and started studying privately around age nine.
My first professional job was at age sixteen and I made a living
playing violin for the next twenty five years.”
– Cody Minnick Free

My first teacher, Janet Williams, was an incredibly kind and talented violinist. Mrs. Williams gave me weekly private lessons until I was fifteen. At sixteen she said it was time to start studying with her teacher, Noumi Fischer. Maestro Fischer had been a child prodigy and was a genius on the violin. Students came from all over the world to study with him. He was renowned for his fingerings. 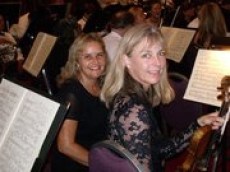 I learned profound life lessons from Mr. Fischer as much as I did music.  He instilled rigorous discipline and was a stickler for practicing the basics: SCALES! INTONATION! RHYTHM! Maestro Fischer was also very gracious, generous and inspiring. His teachings have helped me in every area of my life.

Most recently I’ve been playing for fun and for free in the SBCC Symphony under the magical and inspiring baton of James Mooy.  Playing the violin is a wondrous thing and I feel blessed and lucky to have been given the heart of a musician. Maestro always said, “Music is an international language.”  It’s an honor and a privilege to pass along his teachings.